Stephen Bennett talks about underage glory, translating it to senior success, his brother scoring a goal in an All-Ireland final before him, and making honest mistakes under Liam Cahill.

BY SHANE STAPLETON
Waterford star Stephen Bennett says the culture of their team is to attack.

In recent years, a lot of commentary around Deise sides has related to playing with extra men deep, and it is something that may have contributed to their modest scoring rates.

There has been a marked change in how the team has attacked this season, and Bennett explains that they are told at all times to run towards goal.

Liam Cahill’s underage teams with Tipperary scored 47 championship goals from 2016 to 2019, and his Waterford side has returned an average of 0-29 in their three outings this winter.

“I suppose there must be something in that the two of them were forwards,” says Bennett of Cahill and coach Mikey Bevans (who was a forward for a dominant Toomevara side in Tipperary).

“I think they’re attack-minded everywhere. They want the goalkeeper to be offering, the corner-backs, the wing-back running up the field and looking for the ball.

“They want us to defend together but they want everyone attacking. They want Tadhg (de Burca) coming from the back and just going.

“It’s enjoyable and took a bit of getting used to, just getting the ball every time and just ‘go’. We’re slowly getting into it and we have an awful lot to improve.

“We got a grand score against Clare the other day (3-27) but, looking back on the video then, the amount of times you’d be running with the ball and not know there was a fella running there or an extra pass.

“We got three goals but we could have got more if we clicked better. So there’s definitely more can improve on in that aspect.”

Get 15% off all retro GAA jerseys at https://OrgaRetro.com with promo code ‘OurGame’ 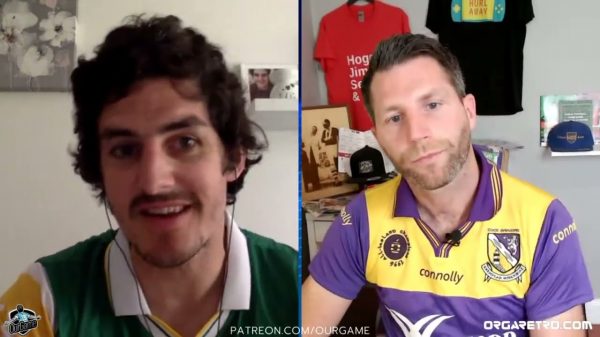